Pulmonary function tests are a group of tests that measure breathing and how well the lungs are functioning.

How the Test is Performed

Spirometry measures airflow. By measuring how much air you exhale, and how quickly you exhale, spirometry can evaluate a broad range of lung diseases. In a spirometry test, while you are sitting, you breathe into a mouthpiece that is connected to an instrument called a spirometer. The spirometer records the amount and the rate of air that you breathe in and out over a period of time. When standing, some numbers might be slightly different.

For some of the test measurements, you can breathe normally and quietly. Other tests require forced inhalation or exhalation after a deep breath. Sometimes, you will be asked to inhale a different gas or a medicine to see how it changes your test results.

Lung volume measurement can be done in two ways:

To measure diffusion capacity, you breathe a harmless gas, called a tracer gas, for a very short time, often for only one breath. The concentration of the gas in the air you breathe out is measured. The difference in the amount of gas inhaled and exhaled measures how effectively gas travels from the lungs into the blood. This test allows the health care provider to estimate how well the lungs move oxygen from the air into the bloodstream.

Lung diffusion testing measures how well the lungs exchange gases. This is an important part of lung testing, because the major function of the lung...

How to Prepare for the Test

Do not eat a heavy meal before the test. Do not smoke for 4 to 6 hours before the test. You will get specific instructions if you need to stop using bronchodilators or other inhaled medicines. You may have to breathe in medicine before or during the test.

How the Test will Feel

Since the test involves some forced breathing and rapid breathing, you may have some temporary shortness of breath or lightheadedness. You also might have some coughing. You breathe through a tight-fitting mouthpiece and you will have nose clips. If you are claustrophobic, the part of the test in the closed booth may feel uncomfortable.

Why the Test is Performed

Pulmonary function tests are done to:

Normal values are based on your age, height, ethnicity, and sex. Normal results are expressed as a percentage. A value is usually considered abnormal if it is approximately less than 80% of your predicted value.

Normal value ranges may vary slightly among different laboratories, based on slightly different ways to determine normal values. Talk to your provider about the meaning of your specific test results.

Different measurements that may be found on your report after pulmonary function tests commonly include:

Abnormal results usually mean that you may have chest or lung disease.

Some lung diseases (such as emphysema, asthma, chronic bronchitis, and infections) can make the lungs contain too much air and take longer to empty. These lung diseases are called obstructive lung disorders.

Other lung diseases make the lungs scarred and smaller so that they contain too little air and are poor at transferring oxygen into the blood. Examples of these types of illnesses include:

Muscular weakness can also cause abnormal test results, even if the lungs are normal, that is, similar to the diseases that cause smaller lungs.

There is a small risk for collapsed lung (pneumothorax) in people with a certain type of lung disease. The test should not be given to a person who has experienced a recent heart attack, has certain other types of heart disease, or has had a recent collapsed lung.

A collapsed lung occurs when air escapes from the lung. The air then fills the space outside of the lung between the lung and chest wall. This buil... 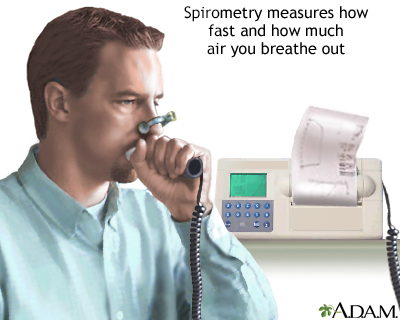 Spirometry is a painless study of air volume and flow rate within the lungs. Spirometry is frequently used to evaluate lung function in people with obstructive or restrictive lung diseases such as asthma or cystic fibrosis. 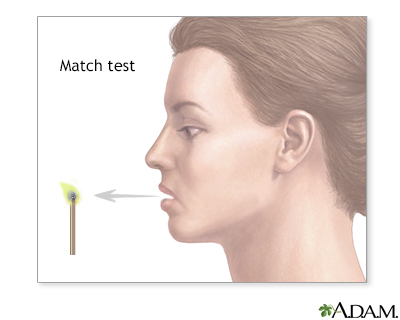 The match test is one of many tests that evaluate pulmonary function. The test is performed by blowing out a match with forceful exhalation of the breath without puckering the lips.

Spirometry is a painless study of air volume and flow rate within the lungs. Spirometry is frequently used to evaluate lung function in people with obstructive or restrictive lung diseases such as asthma or cystic fibrosis.

The match test is one of many tests that evaluate pulmonary function. The test is performed by blowing out a match with forceful exhalation of the breath without puckering the lips.