The immune response is how your body recognizes and defends itself against bacteria, viruses, and substances that appear foreign and harmful.

The immune system protects the body from possibly harmful substances by recognizing and responding to antigens. Antigens are substances (usually proteins) on the surface of cells, viruses, fungi, or bacteria. Nonliving substances such as toxins, chemicals, drugs, and foreign particles (such as a splinter) can also be antigens. The immune system recognizes and destroys, or tries to destroy, substances that contain antigens.

Toxins are substances created by plants and animals that are poisonous (toxic) to humans. Toxins may also include some medicines that are helpful in...

Your body's cells have proteins that are antigens. These include a group of antigens called HLA antigens. Your immune system learns to see these antigens as normal and usually does not react against them.

A histocompatibility antigen blood test looks at proteins called human leukocyte antigens (HLAs). These are found on the surface of almost all cells...

Innate, or nonspecific, immunity is the defense system with which you were born. It protects you against all antigens. Innate immunity involves barriers that keep harmful materials from entering your body. These barriers form the first line of defense in the immune response. Examples of innate immunity include:

If an antigen gets past these barriers, it is attacked and destroyed by other parts of the immune system.

Acquired immunity is immunity that develops with exposure to various antigens. Your immune system builds a defense against that specific antigen.

Passive immunization may also be due to injection of antiserum, which contains antibodies that are formed by another person or animal. It provides immediate protection against an antigen, but does not provide long-lasting protection. Immune serum globulin (given for hepatitis exposure) and tetanus antitoxin are examples of passive immunization.

Tetanus is an infection of the nervous system with a type of bacteria that is potentially deadly, called Clostridium tetani (C tetani).

The immune system includes certain types of white blood cells. It also includes chemicals and proteins in the blood, such as antibodies, complement proteins, and interferon. Some of these directly attack foreign substances in the body, and others work together to help the immune system cells.

Lymphocytes are a type of white blood cell. There are B and T type lymphocytes.

As lymphocytes develop, they normally learn to tell the difference between your own body tissues and substances that are not normally found in your body. Once B cells and T cells are formed, a few of those cells will multiply and provide "memory" for your immune system. This allows your immune system to respond faster and more efficiently the next time you are exposed to the same antigen. In many cases, it will prevent you from getting sick. For example, a person who has had chickenpox or has been immunized against chickenpox is immune from getting chickenpox again.

This animation shows an enlarged view of femoral bone marrow containing immature specialized white blood cells (lymphocytes) and depicts their maturation and migration into either B cell or T cell lymphocytes.

The inflammatory response (inflammation) occurs when tissues are injured by bacteria, trauma, toxins, heat, or any other cause. The damaged cells release chemicals including histamine, bradykinin, and prostaglandins. These chemicals cause blood vessels to leak fluid into the tissues, causing swelling. This helps isolate the foreign substance from further contact with body tissues.

Swelling is the enlargement of organs, skin, or other body parts. It is caused by a buildup of fluid in the tissues. The extra fluid can lead to a ...

This animation shows the process of a macrophage ingesting a foreign substance.

Immune system disorders occur when the immune response is directed against body tissue, is excessive, or is lacking. Allergies involve an immune response to a substance that most people's bodies perceive as harmless.

An allergy is an immune response or reaction to substances that are usually not harmful.

Vaccination (immunization) is a way to trigger the immune response. Small doses of an antigen, such as dead or weakened live viruses, are given to activate immune system "memory" (activated B cells and sensitized T cells). Memory allows your body to react quickly and efficiently to future exposures.

Vaccines are used to boost your immune system and prevent serious, life-threatening diseases.

In an enlarged view of a cut section of a small artery, this animation shows a vaccine injection and follows the path of its antigens, initiating the body's development of antibodies.

COMPLICATIONS DUE TO AN ALTERED IMMUNE RESPONSE

An autoimmune disorder occurs when the body's immune system attacks and destroys healthy body tissue by mistake. There are more than 80 types of aut...

Complications from altered immune responses include: 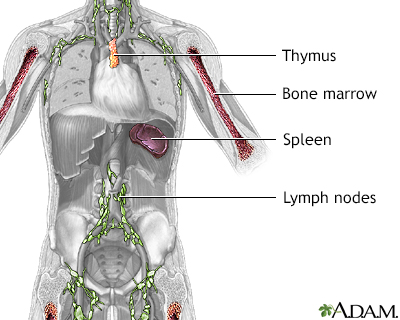 The immune system protects the body from potentially harmful substances. The inflammatory response (inflammation) is part of innate immunity. It occurs when tissues are injured by bacteria, trauma, toxins, heat or any other cause. 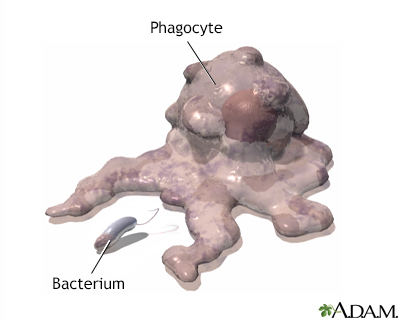 The chemicals also attract white blood cells that "eat" microorganisms and dead or damaged cells. The process where these white blood cells surround, engulf, and destroy foreign substances is called phagocytosis, and the cells are collectively referred to as phagocytes. Phagocytes eventually die. Pus is formed from a collection of dead tissue, dead bacteria, and live and dead phagocytes.

The immune system protects the body from potentially harmful substances. The inflammatory response (inflammation) is part of innate immunity. It occurs when tissues are injured by bacteria, trauma, toxins, heat or any other cause.

The chemicals also attract white blood cells that "eat" microorganisms and dead or damaged cells. The process where these white blood cells surround, engulf, and destroy foreign substances is called phagocytosis, and the cells are collectively referred to as phagocytes. Phagocytes eventually die. Pus is formed from a collection of dead tissue, dead bacteria, and live and dead phagocytes.