Histiocytosis is a general name for a group of disorders or "syndromes" that involve an abnormal increase in the number of specialized white blood cells that are called histiocytes.

A histiocyte is a type of immune cell. It destroys foreign substances to protect the body from infection.

Recently, new knowledge about this family of diseases has led experts to develop a new classification. Five categories have been proposed:

This article focuses only on the L group, which includes Langerhans cell histiocytosis and Erdheim-Chester disease.

There has been debate as to whether Langerhans cell histiocytosis and Erdheim-Chester disease are inflammatory, immune disorders, or cancer-like conditions. Recently, through the use of genomics scientists have found that these forms of histiocytosis show gene changes (mutations) in early white blood cells. This leads to abnormal behavior in the cells. The abnormal cells then increase in various parts of body including the bones, skin, lungs, and other areas.

Langerhans cell histiocytosis is a rare disorder that can affect people of all ages. The highest rate is among children ages 5 to 10. Some forms of the disorder are genetic, which means they are inherited.

Erdheim-Chester disease is a rare form of histiocytosis affecting mainly adults that involves multiple parts of the body.

Symptoms can vary between children and adults, but they may have some of the same symptoms. Tumors in weight-bearing bones, such as the legs or spine, may cause the bones to fracture without an obvious reason.

Symptoms in children may include:

Note: Children over 5 years old often have only bone involvement.

Symptoms in adults may include:

There are no specific blood tests for Langerhans cell histiocytosis or Erdheim-Chester disease. The tumors produce a "punched-out" look on a bone x-ray. Specific tests vary, depending on the age of the person.

Tests for children may include:

Tests for adults may also include:

Langerhans cell histiocytosis is sometimes linked to cancer. CT scans and biopsy should be done to rule out possible cancer.

People with Langerhans cell histiocytosis that involves only a single area (such as bone or skin) may be treated with local surgery. However, they will need to be followed closely to look for signs that the disease has spread.

People with widespread Langerhans cell histiocytosis or Erdheim-Chester disease require medicines to reduce symptoms and control the spread of the disease. Recent studies show that nearly all adults with widespread histiocytosis have gene mutations in the tumors, which appear to cause the disorder. Medications that inhibit these gene mutations, such as vemurafenib are currently available. Other similar drugs are also in development.

Langerhans cell histiocytosis and Erdheim-Chester disease are very rare disorders. Therefore there is limited information about the best course of treatment. People with these conditions may want to take part in ongoing clinical trials designed to identify new treatments.

Other treatments may include:

In addition, people with these conditions who smoke are encouraged to stop since smoking may worsen the response to treatment.

Langerhans cell histiocytosis and Erdheim-Chester disease can affect many organs and can lead to death.

About one half of those with pulmonary histiocytosis improve, while others have permanent loss of lung function over time.

In very young people, the outlook depends on the specific histiocytosis and how severe it is. Some children can live a normal life with minimal disease involvement, while others do poorly. Young children, especially infants, are more likely to have body-wide symptoms that lead to death.

Call your health care provider if you or your child has symptoms of this disorder. Go to the emergency room if shortness of breath or chest pain develops.

Avoid smoking. Quitting smoking can improve the outcome in people with Langerhans cell histiocytosis that affects the lungs.

There is no known prevention of this disease. 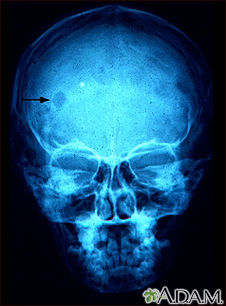 Eosinophilic granuloma - X-ray of the skull 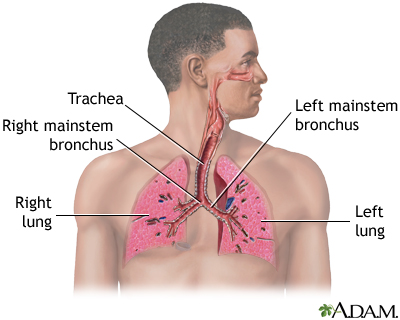 Air is breathed in through the nasal passageways, travels through the trachea and bronchi to the lungs.

Eosinophilic granuloma - X-ray of the skull

Air is breathed in through the nasal passageways, travels through the trachea and bronchi to the lungs.